Check out the video.

Check out the video to the right -->America. The Beautiful.
Skip to playlist 2 if you want. Be prepared to shed a tear or two.
I hope you feel a bit of inspiration no matter your beliefs, politcal views,
or the country you call home.
Peace.
Posted by Zander & Co. at 10:53 PM No comments:

Sorry we have not been keeping up with this as of late. Ever since our neighbors put a password on their wireless, we have no internet access which also means a lot less time is spent sitting in the bathroom which is the only place we got reception. We had been thinking/looking for a new bed for Zander because his bed was getting too small, and mostly he is a crazy sleeper and needs a lot of room. Emily and Ryan offered to give us their daybed and my parents were thinking of getting a new bed and giving us theirs but we ended up taking up Miah & Lisa's offer since they were much closer to us in terms of delivery. So, we took Miah & Lisa's bed because it is extra firm, which I need for my bad shoulder and neck, and gave Zander our bed because it is nice and soft! It is funny walking by Zander's room and seeing this big bed in his room next to all his kid size dressers, desks, etc. Grandma Tauer bought him a new bed spread with TRUCKS on it. It is absolutely perfect for him, and Punky enjoys it too! The first couple nights he slept so well in his new bed. However, the past couple nights have been quite difficult- not due to the bed. Zander has never been a great sleeper, but always a great dreamer. I know this because he talks a majority of the night, non-stop. He cries, he says please, thank you, Theresa, thats mine, no punky, etc. It is not usually too disruptive but last night he was screaming his feet hurt so I had to rub them. Then he told me that was hurting him and he needed socks. So I got a pair of socks, but he needed green socks and they were in the wash. So we settled for red socks. Next he didn't know where Punky was and needed him in by him. Punky came running in. Then he needed to lay on the couch I laid him on the couch. I started rubbing his back hoping he would fall asleep. After Ten Minutes I stopped. He turns looks at me and says keep petting me mommy. Finally he was able to fall asleep until morning, I was not. I can never fall asleep after nights like that. Are his feet really hurting him? Last week it was his knees. Is he having growing pains? Is he having nightmares? Is something happening at daycare? Why is he always talking about 'bad guys' and 'monsters'? Zander is a very smart kid. He can talk and communicate verbally better than most kids his age. He has such a big vocabulary for his age- which makes me happy. There are just so many questions and thoughts I have, that I do not know the answers to, and I wish I did. I thought Mom's knew everything?
Posted by Zander & Co. at 9:30 AM No comments:

My mommy recently saw the movie Marley & Me and was telling me about it. She shared with me how special Punky is to her and how much he loves me even though I chase him with my trucks, throw his toys over the balcony, and am not always nice to him. He is my #1 fan...after mommy of course. In the movie they say "A dog doesn't care if your rich or poor, fat or skinny, or anything at all. Give them your heart, and they'll give you theirs." We opened Mom's computer and looked at all the pictures of Punky & Me. So, I thought I would share some of those photos with you. I wuv you Punky (even though I don't always show it). I guess that's what friends are for... 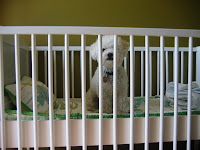 (He was the first to welcome me home from the Hospital) 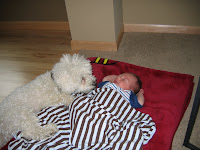 (He took naps with mommy & me) 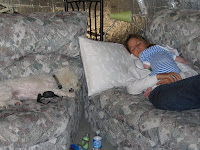 (He gives me kisses) 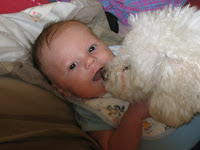 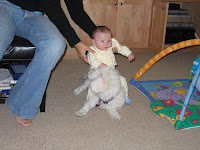 (He plays fetch with me) 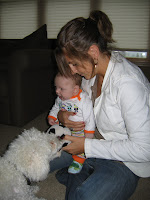 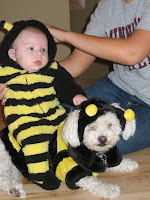 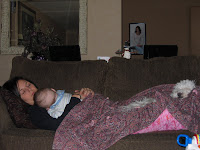 (Taught me how to crawl..sorry to everyone else who takes credit for that) 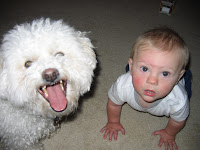 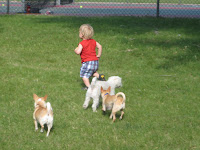 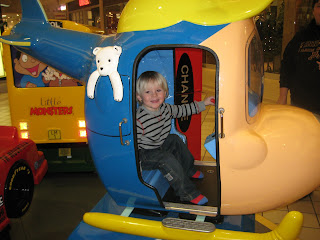 Today I went to Mankato with Auntie Ally, Grandma, Great Grandma Karen, and Mommy. We went to find Great Grandma a new winter jacket. Although, I am not sure if she even got one because I was too busy running around between all the clothes racks. I got to play at the play area too. 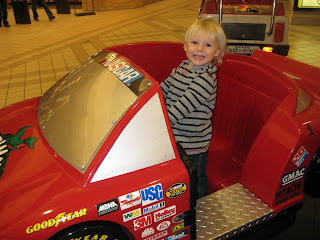 I also got a little nap in on the way home. 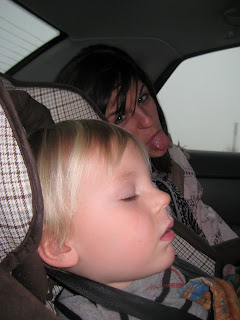 Well, Tommy and my mommy told me when I woke up this morning that I am going to be potty trained by the end of the weekend. They set mommy's cell phone alarm to ring every 30 min. and when it goes off I have to go potty on the toilet. So far they have bribed me with stickers, candy, and telling me I will get to wear big boy underwear. So far, it has worked! Everytime the alarm goes off I like to yell "UNDIES!". The worst part so far is that they keep interupting me when I am watching my movies, or playing with my toys. Time to go potty! 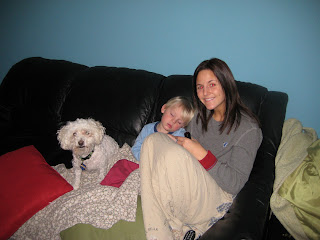 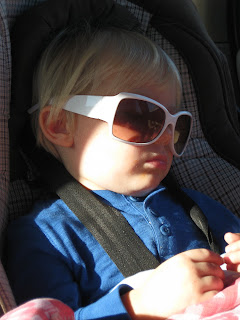 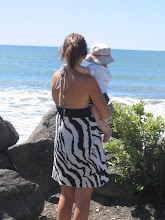 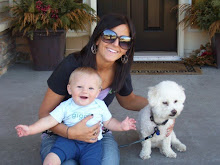 It's All About Me Me Me